In this tutorial, we will learn how to install FreeBSD with XFCE Desktop Environment on bare metal, get the latest official NVIDIA drivers working on FreeBSD 13 as well as Linux binary compatibility support so you can run Linux applications in FreeBSD.

The whole installation process can take up to two hours depending on how fast your internet connection is.

Unlike the prior FreeBSD with KDE Plasma 5 installation guide where we used the desktop-installer script to install and configure the system, this tutorial will show you how to perform the FreeBSD and XFCE installation and configuration manually.

To get FreeBSD with XFCE and NVIDIA Drivers up and running, the following system components will be installed and configured:

Here are the specs of the machine I will be using to install FreeBSD with XFCE in this tutorial:

If you decide to install FreeBSD with XFCE on a virtual machine, you can follow this guide as well, the only difference being not having to install your GPU drivers.

Things to keep in mind:

And with that out of the way, let’s get busy.

Head over to the official FreeBSD download page. On the Installer Images section, click the link accordingly to your machine architecture. Unless you’re using an ancient computer, your architecture most likely is amd64.

NOTE: If you prefer the pre-installed FreeBSD Virtual Machine Images or SD Card Images, you can go ahead and select and download the disk image accordingly.

Next, head over to the Balena Etcher website and download the installer/app image for your operating system [it should be detected automatically]. Plugin the USB flash drive.

This process will likely take anywhere between 10-15 minutes.

Once the FreeBSD USB installer is done, reboot your system and hit F10 or F12 to launch the Boot Loader. Your USB should be listed as a boot device. Select it and press ENTER.

NOTE: In case you are unable to launch the Boot Loader, you can configure the boot device order in your Bios. Check your motherboard manual for instructions.

Once you manage to boot the FreeBSD USB installer you should be greeted by a Welcome to FreeBSD screen. Press 1, hit ENTER, or simply wait a few seconds for the FreeBSD installer to start.

On the Keymap Selection screen, choose your keyboard map. The default FreeBSD keymap is the US and I use an English keyboard so I will select Continue with the default keymap.

Set a Hostname for your system, e.g., freebsd.

On the Distribution Select screen, leave the default selection and press OK.

Next, we will proceed with disk partitioning. Here you can choose Auto (ZFS), Auto (UFS), Manual, or Shell for the more advanced users.

I have only one disk in my system and I am a sucker for ZFS so I will choose Auto (ZFS) – Guided Root-on-ZFS partitioning.

On the ZFS Configuration window, you can choose additional ZFS configuration options such as encryption, swap size, partition scheme, etc. Unless you know what you’re doing, leave the defaults and select the Install – Proceed with Installation option.

Choose Stripe – No Redundancy. If you want disk redundancy, you can configure the Mirror/Raid redundancy here.

Select the disk to install FreeBSD. This is an important step as all the existing data on the disk you select here will be wiped out.

Select Yes to confirm the installation on the given disk.

The FreeBSD installer will now proceed with installing and setting up the FreeBSD system on your disk. This takes less than one minute on an SSD disk.

Next, you will be prompted to type a password for your root account. Make sure you type a strong password but most importantly, make sure you remember it.

Now is time to configure your network settings.

I am using a LAN connection but if you’re looking for wifi, I highly recommend you the EDUP EP-AC1607 802.11ac USB Wireless adapter which I tested and works out of the box on FreeBSD 13 as well as the previous FreeBSD versions. The link above is NOT an affiliate nor sponsored link.

FreeBSD will now proceed to configure the IPv4 settings for your network interface.

Next, FreeBSD will look for a DHCP server and configure the network interface accordingly.

If you are not using IPv6, choose No when prompted to configure the IPv6 for your network interface.

Here are the settings detected for my system. Your DNS settings may differ.

On the Time Zone Selector window, choose your region.

Next, choose your country within the region you selected above.

Check if the date was detected correctly by the FreeBSD installer. If your computer is not connected to the internet, you may have to set the date manually.

Check if the time is detected correctly by the FreeBSD installer. If you are not connected to the Internet, proceed setting the time manually.

On the System Configuration window, choose the services you would like to start at boot. If you don’t know what to select here, leave the defaults.

On the System Hardening window, you can take extra steps to secure your system. I usually select options 5 to 10 for a good security balance on my FreeBSD systems.

Next, select Yes to proceed to add a user account to your FreeBSD system.

The FreeBSD installer will prompt you step-by-step to input the new user information. For most prompts, the default setting is sufficient therefore you will just press ENTER.

Here is a table containing each prompt as well as the action you need to take.

On the Final Configuration window, you can review all the configuration choices you made so far – if needed. Choose OK when finished.

In case you want to perform more advanced configurations for your system, you can choose to open a shell here. Alternatively, choose No to finish the FreeBSD installation.

At this point, the FreeBSD installation is completed. Reboot the system and remove the USB flash drive from your computer.

If you are welcomed by a login prompt once the system rebooted: congratulations! You successfully installed FreeBSD on your machine.

To make sure our FreeBSD system is up to date, type the following command in the terminal

When prompted with the list of files to be added as part of the update, press the Q key twice.

Alright. Is time to install the XFCE Desktop Environment on FreeBSD. XFCE requires a few additional components where the most critical is the display server Xorg.

Execute the following command in the terminal: 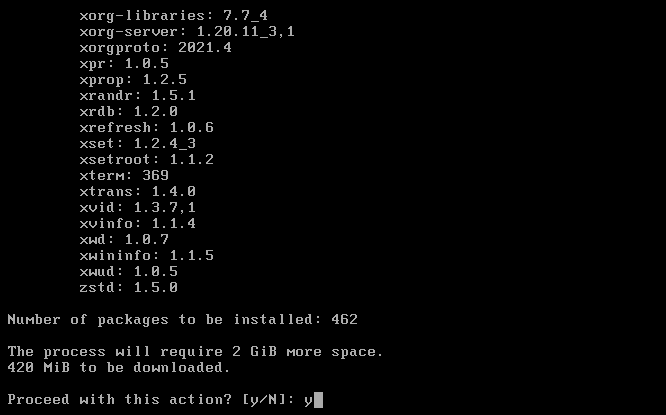 This step will take a while to complete, depending on how fast your internet speed is. You will not be prompted for any action so feel free to take a well-deserved break. Give it ~45 minutes.

Installing the NVIDIA drivers on FreeBSD is pretty straightforward. In fact, it is arguably easier than on other operating systems.

Optional: to search the available NVIDIA drivers on FreeBSD, use the following command:

To install the latest proprietary NVIDIA driver on FreeBSD execute the command below:

Execute the following command to load the NVIDIA driver in at boot:

Load the NVIDIA driver now in the system so you won’t need to reboot the system:

Generate the X configuration file. This file will be located at /etc/X11/xorg.conf

If X starts successfully, you will see a screen like the one shown above. Next, test if the XFCE starts by executing the following line:

If you encounter any errors when trying to start X, e.g., Fatal server error / No screens found (EE) errors, the X server is most likely confused about which GPU should use as you likely use more than one GPU in your system. Here is how to fix the No screen found error on FreeBSD.

Greeter is basically the user interface that allows you to type your credentials, allows you to select a session, or choose between various desktop environments installed on your system.

To configure Greeter in LightDM we need to edit the lightdm.conf file using the following command:

Save and exit the file by typing the ESC key and pressing twice the letter a.

Next, let’s instruct FreeBSD to start LightDM at boot. Edit rc.conf as before using the following command:

Add the following line at the bottom of the file:

Save and exit the file by pressing ESC and twice the a key.

And finally, let’s test LightDM on our machine:

At this point, you should be able to boot your system into XFCE using the LightDM desktop manager. I advise you not to reboot yet, instead use CTRL+ALT+F2 to switch to virtual terminal and continue with the remaining steps as there are still some important things left to configure.

Linux binary compatibility, also known as Linuxulator, is a mechanism that allows you to run unmodified Linux binaries under FreeBSD.

To enable Linuxulator in FreeBSD execute the following commands in the terminal:

To make this change permanent on reboot, we need to edit the /etc/rc.conf using the following command:

Add linux_enable=”YES” at the bottom of the file.

To save and exit ee, press the ESC key, type the a key to leave the editor, and again press a to save the changes.

Install the Linux subsystem inside FreeBSD consisting of a set of packages sourced from CentOS 7 using the following command:

Pay attention to the message on the screen once the linux_base-c7 package is installed.

We need to edit /etc/fstab and add the lines highlighted in red above.

Add the following lines at the bottom of the file:

Press ESC and press the “a” key twice to save and exit the file.

Next, we need to mount the linprocfs, linsysfs, and tmpfs by executing the commands below. Alternatively, you can reboot the system and FreeBSD will take care of that.

That’s it! We are ready to boot the system to XFCE and enjoy FreeBSD with a Desktop Environment. To gracefully reboot FreeBSD, type the following command in the terminal:

If all is well, you should be greeted by the LightDM login screen and be able to boot into XFCE once you logged in. From here on, the sky’s the limit. And the sky on FreeBSD is pretty high.

READ NEXT: How To Install a GUI Package Manager in FreeBSD [OctoPkg].

In this guide, we learned how to manually install FreeBSD with XFCE, install the latest NVIDIA drivers on FreeBSD, enable Linux binaries as well as do all the necessary configurations to get XFCE running on FreeBSD.

The whole installation process may seem complex at first but once you go through the guide once or twice, the whole thing starts to make sense.

If you are looking for other great ways to customize your FreeBSD system, as well as a lot of other useful FreeBSD tips and tricks, I highly recommend you have a look at Vermaden’s blog.

I hope you found this guide useful. See you next time.